What are the most common signs and symptoms? Request a Callback

Clinically Reviewed on May 17, 2022 by Dr Alexander Lapa (Psychiatrist). All information on this page has been reviewed and verified by a certified addiction professional.

Home What We Treat Cocaine Addiction

Cocaine is a stimulant and a highly addictive illicit substance and abuse can lead to cocaine addiction. Cocaine is currently a Class A controlled substance in the United Kingdom.  Cocaine is a fine powder that commonly inhaled or intravenously injected.

The manner in which you consume cocaine affects how your body and mind is affected by this dangerous drug.

When cocaine is snorted, you will likely experience a range of short term symptoms. These symptoms include: the loss of smell, difficulties swallowing, nosebleeds and hoarseness.

Cocaine is one of the most dangerous and misused drugs worldwide. Cocaine addiction is more often than not a result of repeated cocaine use – and the health issues it comes with are also well documented and extremely dangerous to you.

The drug is also known to have a dangerous effect on your personal life. Many families, relationships, marriages and friendships had been broken through cocaine addiction.

Are you someone who fears that their life is being affected through cocaine abuse – but you cannot stop taking the drug? It is never too late to get help. At Ocean Recovery Centre, we offer cocaine addiction treatment to help you free yourself from the shackles of cocaine addiction.

Cocaine Addiction Treatment options such as the ones we offer at Ocean Recovery Centre have been developed to help control addictive behaviours by flushing out harmful toxins from your system while using effective therapy and counselling to help the mind recover.

The psychological impacts of cocaine addiction

When your addiction to cocaine progresses, you will likely experience a range of personality and behavioural changes. These changes include the development of mental health problems such as paranoia, anxiety, irritability and restlessness.

Eventually, you may develop a condition known as paranoid psychosis. If this condition arises, you will begin to ‘lose touch’ with reality. You will also begin to experience symptoms known as ‘auditory hallucinations’. This is when you begin to hear voices and other sounds that are not real.

The physical impacts of cocaine addiction

Cocaine addiction also negatively affects you from a physical standpoint. Cocaine is toxic to skin and will cause death of tissue. This is known to develop into a deadly infection known as gangrene. This is particularly a risk if you consume cocaine via swallowing. Cocaine will begin to damage tissue in bowel causing potentially deadly ulcers.

Cocaine additionally is also known to cause strokes or cardiac arrest. The vast majority of cocaine-related deaths are due to cardiac arrest. Cocaine makes the heart swell. This may lead to respiratory arrest and death. This may occur even when cocaine is consumed as a one off. However, those of you who are addicted to cocaine run a particularly high risk of experiencing a heart attack, stroke or seizure due to your chronic cocaine use. 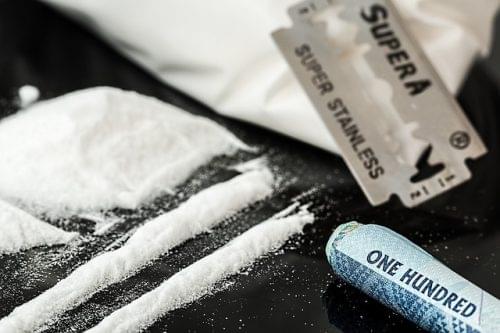 Below, we list the most common health implications linked to cocaine addiction:

Cocaine’s effect on the human brain

Cocaine addiction arises in much the same manner as any other drug addiction. The key cause of cocaine addiction is due to the effect cocaine has on the brain. When you consume cocaine, you will experience pleasure because cocaine stimulates a neurotransmitter known as dopamine.

Evolution developed dopamine to encourage living creatures to engage in activities that promote survival. These activities include drinking water, eating food and mating. However, cocaine hijacks this system and long term cocaine addiction permanently affects this system. This is why those who were once addicted to cocaine may experience urges to relapse even decades into their recovery.

Cocaine blocks the re-uptake of dopamine. This then means you must continue to take cocaine in order to experience normal feelings of happiness and contentment. You also build up a tolerance to cocaine. This means you must take ever greater quantities of cocaine in order to experience the desired effects.  Increasing the amount of cocaine you consume further increases the risk of experiencing a range of negative physical and psychological symptoms linked to cocaine use.

Cocaine Addiction Treatment – How It Works:

The first step of cocaine addiction treatment must be done by yourself. Step one is realisation. Many people who struggle with cocaine dependency will not admit that they indeed have an issue with drugs. This is due to the fact that addiction is still a stigma and many people feel that they would be considered weak if they admit that help is needed.

However, addiction is a disease – one that can happen to anyone. Addiction does not discriminate – an often-quoted sentence that is indeed true. People from all walks of life struggle with addiction – with no bearing on their strength, social standing or financial situation.

Once you are ready to admit you have a cocaine problem- give us a call. Once you have agreed to join our programme – we move on to the next step of your cocaine addiction treatment, detox.

The process of detoxification means to cleanse your body from a certain substance. For cocaine, this could take some time to get rid of the drug. It can stay in your urine for 4 days, and in your blood for up to 48 hours. Withdrawal symptoms are quite difficult for many addicts – as it can lead to some uneasy feelings such as ; runny noses, anxiety and depression. We employ medical professionals who are able to administer medication where needed – and make the normally uncomfortable rehab period a lot more comfortable.

After detox, we move on to CBT – cognitive behavioural therapy. This will allow you to change your way of thinking and coping with drug cravings. You will also be treated for co-existing psychological issues at our cocaine addiction treatment centre.

The withdrawal from substances such as cocaine can involve both physical and psychological withdrawal symptoms which range from mild to severe.  Amongst the most common symptoms are

It is important that individuals undergo withdrawal under the supervision of trained medical professionals.

Why not give us a call today to find out more? Alternatively, you could also visit some of our other pages for more information.