Why drinking non-alcoholic beer can cause a relapse

Relapse & non alcoholic beer related risk
The explosion in non-alcoholic beer options has created a great choice for non drinkers but also new dangers for recovering alcoholics struggling to fight against relapse. Drinking non-alcoholic beer may seem like a sound alternative to stronger substances, but for people in recovery, the impulsive similarity can trigger cravings and create a slippery slope to relapse.

As alcohol-free beers become ubiquitous in pubs, bars and clubs, the concept of non-alcoholic beer relapse is gaining traction. Educating people about the dangers of drinks that contain even a small amount of alcohol is imperative to counteracting this trend. Indeed, even a drink with just 0.5 alcohol volume can derail years of progress, putting alcoholics back in that vicious cycle of desire and destruction.

What is non-alcoholic beer?

In essence, non-alcoholic beer is a construct of marketing. In actuality, beer is by definition alcoholic. Therefore, anything presented as non-alcoholic beer is typically beer in the conventional sense, but with a very small percentage of alcohol content. Some drinks are heated to boiling point, removing all alcohol entirely, but they are essentially soft drinks with a famous brand slapped on the bottle.

Across Britain, non-alcoholic beer sales grew by 58% in 2017. This has created a new, lucrative market for traditional companies that mastered the alcoholic beverage. As people become more health conscious, abstaining from certain negative lifestyle options is increasingly common. The rise in vegetarianism speaks to this trend, and non-alcoholic beer is essentially a way for successful drinks brands to combat those sentiments.

For the recovering alcoholic, this relatively new product may seem like a good idea. After all, non-alcoholic beer looks like beer, smells like beer and very often tastes like beer – without the negative side effects of drinking alcohol.

According to the National Institute on Alcohol Abuse and Alcoholism, 90% of alcoholics will experience a relapse in the four years after they stop drinking.

In that uphill battle to stay sober, non-alcoholic beer can be an extra temptation, increasing the likelihood of relapse. Just as cannabis is considered a gateway drug, encouraging users to try more extreme alternatives after initial exposure, non-alcoholic beer can have a similar effect, curtailing years of addiction treatment.

Why light beers are not a viable alternative for alcoholics

The likelihood of relapse among recovering alcoholics drinking light beers is rooted in science. Drug addiction is a consequence of impulsivity, and the similarities of non-alcoholic beer to the real thing – in terms of appearance, smell and many other factors – has a psychological effect that inspires cravings.

Non-alcoholic beer tends to be made by the same manufacturers as conventional alcoholic beer. Major brand such as Heineken and Becks have their own range of alcohol-free drinks, distinguished merely by a few digits or a specific colour on the label. To the alcoholic brain, this is a cruel trick because the impulse of drinking from the same style of bottle, with all but the same design, is considered acceptable, but drinking alcohol is not. Confusion is common in such circumstances, hence the gateway of temptation.

One innovative study by scientists in California found that the mere smell of alcohol can be enough to trigger cravings and subsequent relapse for people diagnosed with clinical alcoholism. Such research is backed by empirical experience. Just think about the last time you smelled chocolate or a cake. You wanted to eat it, right? The same applies to non-alcoholic beer, which often has a very similar scent to traditional beer.

Putting boundaries in place and avoiding such dangerous potentiality is imperative for recovering alcoholics. In this regard, non-alcoholic beer does more harm than good, and experts recommend avoiding such products in order to maintain a healthy life of sobriety. 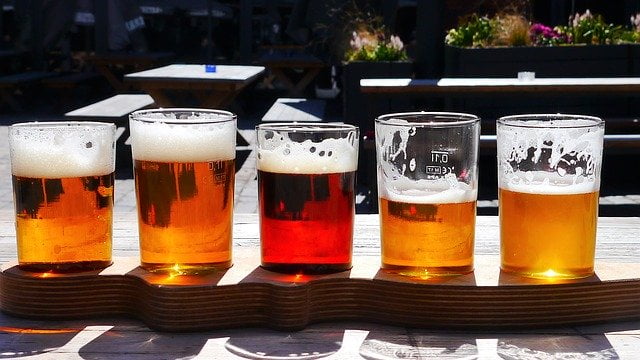 Why do people drink non-alcoholic beer?

Peer pressure and addiction can be a recipe for disaster, and often people view non-alcoholic beer as a happy medium response to peer pressure. We have all been to a party and did not feel like drinking alcohol but felt compelled to do so. Within our culture, alcohol has become an ubiquitous accessory of recreation, synonymous with a good time. Accordingly, in certain social situations, there is almost an expectation that people will drink alcohol.

For people who appreciate that expectation but who do not want to participate, non-alcoholic beer may seem like a subtle substitute. The similarity in bottle designs can help a non-alcoholic beer drinker blend in with the crowd, appearing to join in with everybody else while actually abstaining.

Such a concept is deeply worrying, and it speaks to the anxiety that permeates modern society. As a rule, people are overly concerned with how other people perceive them. Rather than making decisions based on their own thoughts, values and feelings, many people feel pressure to conform to certain ideals. That pressure has fuelled the popularity of products such as non-alcoholic beer, which can be seen as a tool of social subterfuge.

Where to find help for non-alcoholic beer addiction

Here at Ocean Recovery Centre, we understand the complex nuances of addiction, regardless of the substance that instigates it. Our personable approach to addiction treatment places emphasis on individual realities rather than widespread generalities. We appreciate the very real dangers posed by non-alcoholic beer, and we have a range of services that can assist you in overcoming addiction.

Our treatment centre covers three floors with inspiring views across Blackpool beach and the surrounding area. We offer a structured detox programme, backed by valuable therapy regimens and excellent aftercare support, leading to incredible success for a large number of clients.

If you fear a relapse into alcohol dependency, contact our experienced team today on 01253 847 553. Likewise, if you have concerns regarding a loved one, colleague or friend, we can provide free and confidential guidance on the best course of action. This is particularly advantageous for those seeking to understand the dangers of non-alcoholic beer for recovering alcoholics.

The alcoholic beverage industry is changing, and methods for treating substance abuse must also adapt. As companies introduce new products and improve their marketing techniques, so must we develop fresh education tools and introduce modern treatment measures. Ocean is leading the way in that campaign, so get in touch today to begin your journey.