This week the National Records of Scotland published its annual Drug-related Deaths in Scotland report covering the year 2014.

According to the report drug related deaths are now at their highest levels since records began in 1996.

During 2014 the report states 613 people died in Scotland due to a drug overdose.

This is a massive 16% increase on 2013’s figure. 74% of those who died of a drug overdose were male. 31% of deaths occurred under the jurisdiction of NHS Greater Glasgow and Clyde. 11% were from Lanarkshire and 17% were from Lothian. 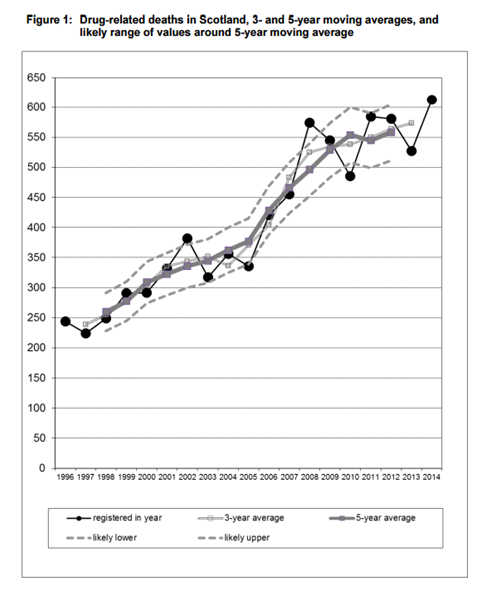 The Scottish Government claims an ‘aging group’ of addicts, the so-called ‘trainspotting generation’, were most affected by drug-related deaths.

Most common cause of drug overdose

Opiates such as heroine, morphine and methadone were responsible for more than half of the 613 deaths in 2014. 35%, or 214 deaths involved a methadone overdose.

Experts blame drug classification reforms for this increase in the number of people dying of a drug overdose in 2014. Both zopiclone and tramadol were both re-classified as controlled drugs in 2014.

However, Paul Wheelhouse MSP, Scotland’s community safety and legal affairs minister, feels the figures do signal progress. He told Ocean Recovery Centre: “Scotland still faces a huge challenge in tackling the damaging effects of long-term drug use among an ageing cohort of individuals in Scotland.”

“This group of individuals often have long-term, chronic health problems as a result of sustained and, in many cases, increasingly chaotic drug-use issues. We are undertaking work to better understand the needs of particular sub-groups.”

Roy Robertson, chairman of the National Forum on Drug Related Deaths, said “Critical to reducing mortality rates in this cohort is person centred harm reduction and drug treatment services. For this to be successful, we need services that have the capacity, range of interventions and the skills to engage this population.”

Dave Liddell, director of the Scottish Drugs Forum added: “Those who are dying are, in most cases, the most vulnerable of the people in Scotland with a drug problem.

“As a result, we must work with services to see how we can engage better with this group – working more effectively and engaging in active outreach – as there is strong evidence that engagement with services is a protective factor in reducing overdose deaths.”

Find out the latest UK drug use statistics here >